During the thousands of years of human civilisation, some cities have risen to prominence; becoming economic, political and cultural centres of habitation for their nation. As nations have grown, each typically selects one prominent city to serve as its capital. A capital city is usually the largest city in a nation, and is often the seat of government.

This is not always the case, however. Some capital cities are chosen for symbolic reasons, rather than due to their size or the location of their government. Other nations do not have an official capital city, for various reasons, and have a "de facto" capital instead.

The capital cities of the world are some of the most famous cities on Earth, and often possess a rich history dating back centuries (or longer).

Here we will feature images of capital cities from around the world seen from space.

To view larger versions of the images and for more information, click on the thumbnails.

The capital city of Greece, Athens, is pictured in the centre of this Sentinel-1 image, acquired 22 April 2014. The city glows a bright white in the radar image.

Athens is located on the Attica Peninsula, on the Aegean Sea. The city is famous for its ancient civilisation, which flourished in the 4th and 5th Centuries B.C.E, and would go on to inspire much of western civilisation. It is the birthplace of democracy, and was an ancient centre of philosophy and learning, home to historical figures such as Aristotle and Plato.

Today, Athens is the largest city in Greece and has an estimated population of 3,090,508 (as of the latest census). It was appointed the capital of the Hellenic Republic (commonly referred to as Greece) in 1834. 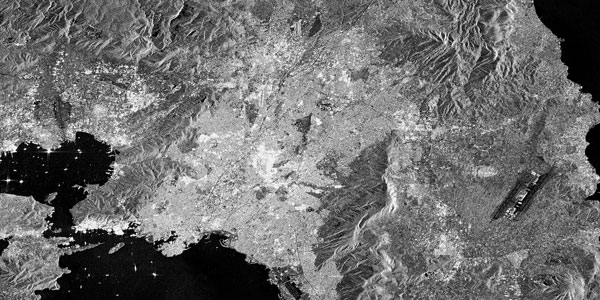